It's a Texas thing 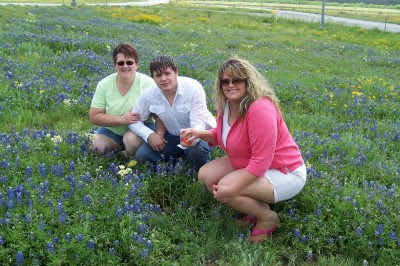 It's a Texas tradition to have your picture taken in blue bonnets. Here is a picture of my brother, sister, and I in a field of blue bonnets. We went to my Grandmother's funeral over the weekend and found several beautiful patches of blue bonnets along the way. I'll have some more pictures from our trip to Central Texas later. I need to catch up on laundry, dishes, and other stuff first.
Posted by Brenda at 5:47 PM

That's a nice picture! I bet your mom would like it in a frame--LOL.
Welcome home--we missed you!
((HUGS)) I was just wondering how you were doing!