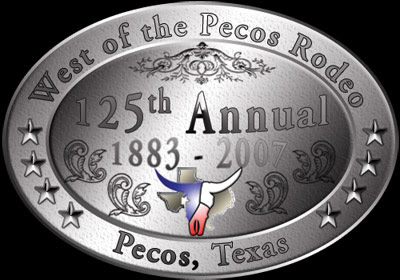 Next weekend Kinsey and I will attend The 125th Annual West of the Pecos Rodeo. No we don't participate but we are spectators. I grew up in Pecos, Texas "Home of the World's First Rodeo"and have attended as many years as I've been able to. Kinsey has gone pretty much every year of her life.
Growing up I wore jeans, boots, and western attire. Now days I wear shorts, flip flops, and the coolest shirts I can find...lol! Pecos is hot in July usually averaging about 110 degrees during the day. When we want to take Kinsey to the park to play we wait until 10pm to go so it's cooler. You would be surprised at how many people are out there at that time of night.
The following week we will be back home and attend the Smokey Bear Stampede and Parade. It's the local rodeo and festivities. The parade is amazing because it has so many fire trucks in it. Trucks from all over the area come to participate. You just have to hope there's not a fire any where because all the fire trucks are here...lol! 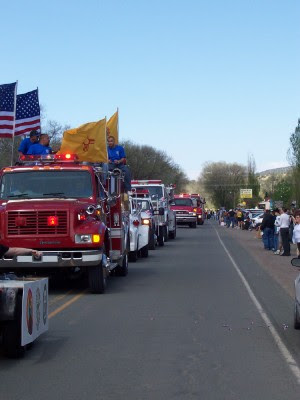 ps. this fire truck picture was actually taken in May at another parade...that's why the trees don't have leaves yet. All but one parade in Capitan have firetrucks in them...lol! The Christmas parade is a non-motorized parade so there aren't any trucks in it.
Posted by Brenda at 10:42 AM