This is Annabelle the cat also know as Kit-Kat, Annie, Cutey, and that Damn Cat. Kinsey has also told me her name is Annabelle Elaine...lol! It's a common middle name in our family.

Kinsey has wanted a cat for a few years but we kept putting off getting one until she was a little older and able to help take care of it. This year when she wrote her letter to Santa and spoke to Santa himself she asked for a "real live cat" for Christmas. We decided this was the year. Santa called Mama and Daddy and told them to go pick out a cat at the Humane Society and he would take care of everything. When we walked in we told the people there that Santa had sent us they were very kind and played along with us. Annabelle was the first kitten we looked at and the one that captured our hearts. I specified that we wanted a short haired female so that limited our selection. Annabelle is a tortoise shell short hair. It's a combination of a black cat and a calico. She has a lot of orange on her back that you can't really see in these pictures. Her eyes are a beautiful green. 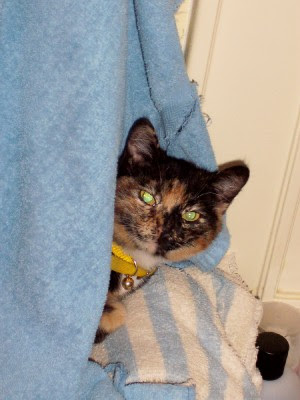 In this picture she is in the bathroom sitting on my towel basket and laying in my hanging towel. It's a favorite place of hers to sleep or nap. Now when I have to go to the bathroom during the night and she's there is almost scares me to death to see her eyes glowing in the towels!

Notice the coloring on her face. I keep saying it looks like someone took a black marker and divided her face in half. It's a very distinct line. Half her nose is pink and half is black. 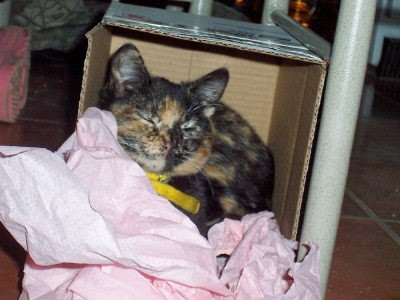 For Kinsey's birthday party I ordered some items and they came in this box with the pink tissue paper. Annabelle found the box and made it a new napping place. She loves to "hide" under the table or on the chairs and attack you when you go by. I can't tell you how many times my house shoes have been attacked. 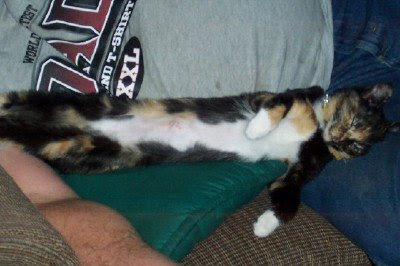 Her favorite place to sleep is on Neal's stomach. She loves to stretch out and get comfy. You can see her surgery scar on her tummy in this picture. She was spayed in January. She's not a modest cat as you can see in this picture.

Right now she is racing around the house playing with her toys. Grandma gave her a Christmas stocking full of mice, balls, feathers, and all kinds of goodies. I'm sure over half of them are under my bed right now :) She loves to race from one end of the house to the other at full speed, tail flying.

I wish I had a picture of her sitting in the window talking to the birds. We have bird feeders right outside the living room window and she loves to sit there and talk to the birds. She chirps and makes funny little noises. On nice days, I've opened the window so she can talk to them through the screen. She loves it! Hopefully I'll have a picture or video of that soon.

Thanks for checking out our newest pet!