Getting ready for our first kids birthday party

Kinsey turns 6 on March 9th and we will be having our first kids birthday party on the 10th. We've always just had family and a few close friends but since Kinsey is in kindergarten she wants to invite some of her friends. I decided we would not be having this party at our house 1) because my house is small and 2) who knows what the weather will be. I had considered a park but see reason #2. I ended up booking Calamity Jane's Coffee and Eatery party room. Sounds like a weird place to have a kids party but in a village this size we don't have a lot of choices.

Kinsey has invited 10 friends and the theme is My Little Pony. She wants to play pin the tail on the donkey so I adapted it to Pin the Crown on the Pony. We are also going to make bead bracelets or necklaces, break a pony pinata, and if there is time we may play a few more games. I'm going to make a cake and bought this cute My Little Pony set to put on top of the cake. I will probably only use the Pony's but it fits our theme perfectly since we will be having pizza and cake for her party. 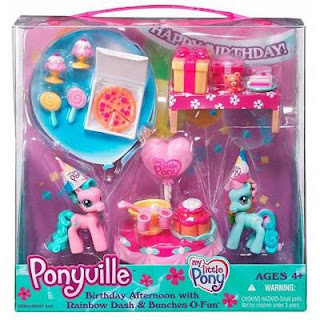 After Kinsey's recent comment that she had to many toys we decided that she didn't really need anything else for her birthday. Instead we are asking that each child bring a new book, video, or small donation and we would make a contribution to the local library. Kinsey loves the library so this seemed like a great idea.
Neal and I did tell Kinsey if she would learn to ride her little bicycle without the training wheels we would get her a new bicycle. I bought the new one yesterday and she will get it on her birthday (not at the party).
I'll post pictures of the party when we are done! I will also try to get her Pooh pictures on here. I have taken a picture of Kinsey with the same Pooh since the day she was born. The first year I have monthly pictures and then yearly after that. Here is 9 months old and 5 years old 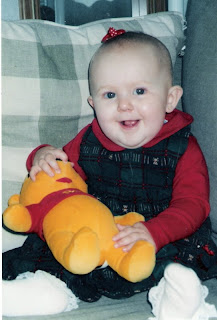 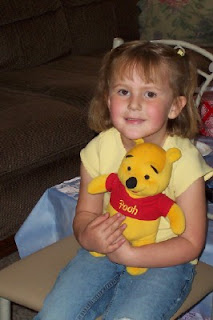 Oh, that is such a sweet idea to have the children donate the toys to the library. What a great lesson to teach your child.

Love the idea of taking a picture with Pooh!

This is awesome! I'd love to donate my son's toys too. BTW, Cute picture with Pooh!